Took a weekend and headed up north to the Cascade hoping we would find the early run of steelhead. There hadn't been any reports so it was kind of a toss up. A buddy and I showed up to the hatchery and decided to walk past the group of guys already lined up top. He hadn't been there before so I assured him we could get down below everyone and fish in solitude. There were zero winter runs in the intake creek, usually not a good sign. We walked down to a lower hole away from the crowd, which I'd rather fish alone and work at it than fish arm and arm. Those guys hadn't hit anything yet either, and usually when it's on there are a few fish sitting on the bank by 7am. It was cold :) Started fishing around 7:30 and worked the lower hole for a while. The water was so gin clear you could see just about anything swimming. I spotted two coho moving up into the hole and a dolly chasing their eggs. I put a clob of two eggs on, threw it in their path and sure enough hooked into the Dolly. Nice to get my rod moving. Released it. The coho sitting in the hole were pretty lock jaw to eggs. My buddy comes walking back and decides to switch from fly fishing over to his gear. He sits in the hole with me, on the low side. His drift wasn't quite right from where he was standing so I told him to move up above me and swing into the far side as I knew of the deep pocket. Sure enough, first cast with a spoon he hooks into a fish. It had weight. It splashes it's tail up out of the water and I kinda figured it was a large coho. Finally he gets the fish closer to shore and I can see it's tail. Not a coho - a beautiful steelhead. It brought him down stream and finally I got a good angle on it and picked it up out of the water with my hands. It scaled in just around 15 pounds. It was truly beautiful. We celebrated with some whiskey and continued fishing. The rest of the day was slow but we picked up some nice Dolly's to keep it interesting - one that was over 6 pounds but unfortunately we didn't get a photo of it. I marked it a two because for one, I didn't catch a steelhead, and it really was not a hot weekend like it can be. Still a wonderful time and putting my buddy on the nicest steelhead of his life thus far was very satisfying.

11/26/2013 1:34:00 PM
Great job! I like that close up pic of it's head, nice clear detailed photo. Another summer run was caught last Friday.....not as big as your buddys though, nice fish.
Should be getting some winter runs in there with the next big rain. That is what I am hoping anyway. 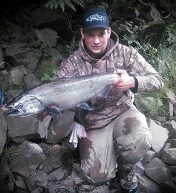 11/26/2013 9:54:00 PM
He is dark but thats not a summer run, looks like a fall/early winter that has been hanging around for a while, summer runs have a very different look to them and are never that thick, nor does the cascade get summer runs, hes got color but that is a late fall/winter fish.

11/26/2013 10:19:00 PM
Yeah it was a winter... I was going to mention the lenses really brought out the green and red but the fish had lots of chrome on it... And yeah Danny I should have formally introduced myself... You guys made a good call taking off but we came from Kirkland and he from Portland so I figured I'd show him the river, and somehow we got lucky! But I did also confirm the hatchery only releases winters so he was just early and likely waiting for his woman to show up ;) or someone picked her off and he didn't know what to do thereafter... We can relate more to fish than we thought?

11/26/2013 11:15:00 PM
Haha yea he must have entered in october and been chilling out for a while. I love when they get that red! Thats awesome you guys found one though, probably was too cold to bite us early in that hole. Its still been tough fishin. Hoping something changes soon!