Previous Next
This time of year is one of my favorites for catching some giant brown footballs, and one of my favorite baits to use is the Spinnerbait. But I think too many anglers are missing out on this opportunity. Like many of the smallmouth pros, I realized that most fishermen overlook the obvious, a smallmouth isn't a largemouth. They mistakenly view the smallmouth as simply a color variation of the largemouth, instead of a separate species of fish requiring a different approach in fishing lures and strategies.

Despite such a shortsighted view, they can most of the time catch smallmouth bass anyway. Especially when and where the two species of bass share the same habitat, forage and even cover.

But those who catch smallmouth bass most consistently are those who recognize the differences in habitat, forage, and attitude. This is especially true for those who target bronzebacks with spinnerbaits. These anglers have learned that smallmouth bass typically have larger strike zones than do largemouths.

Largemouths are usually found on a stump, a log, a bush, or clump of grass. They will hit about any bait that comes within 5 feet or so of that piece of cover. But they aren't normally going to chase down something that's 20 feet away.

Smallies will move farther because of the type of cover they are on, such as a large flat. They tend to actively chase down their food more than a largemouth, which prefers to ambushes its food.

Another consideration is the speed of the lure presentation. Depending on its mood, a largemouth might attack a lure moving fast or slow or somewhere in between. A smallmouth generally likes it one way. Speed can make smallmouth bass stupid. Ripping a bait will often draw strikes from fish that will fallow, but not hit a slower moving bait.

Sometimes a largemouth's bite is quite subtle, almost undetectable. Not so with the bronzeback, as they tend to whack it.
Smallmouth bass aren't always found in clear water, but they are likely to be there more consistently than are their larger green cousins. That's why on sunny days I prefer silver willowleaf blades, specifically for blade flash rather than thump of the Colorado blade.
I have caught some huge smallies using giant spinnerbaits with big skirts and big blades, but more often than not smallies will shy away from those larger baits. Smaller more compact profile baits are usually better.

You can still use a heavier head, but you should trim the skirt shorter and put on smaller blades. They will sometimes still hit the big baits, but smaller ones tend to work better overall. Smaller blades also help keep the bait in the water during high speed retrieves.
A No. 3 or No. 4 willowleaf blade seems to be a good compromise because it gives off a good amount of flash with a minimal amount of lift.

I use a double willowleaf configuration most of the time, but I sometimes switch to a tandem setup that includes a willowleaf and a Colorado style blade, especially when the water has a bit of color to it. I use silver blades for sunny days and a gold blade with silver or painted blade on cloudy days.

With a silver blade combination for sunny days in clear water I like a white, white/chartreuse, or shad-color body and skirt.
On dark days I use gold main blades with a small silver Colorado blade in the same colors.

For off color water I use painted Colorado blades for more thump and I like firetiger, orange, and chartreuse bodies and skirts. Smallmouth feed mainly by sight which using bright colors makes for an easier to see target in dirty water. The strength of the wire frame that links the lure body to the hook and blades is also important because of the ferocity with which smallies slam spinnerbaits.
The hit can be very hard, usually because the bait is moving fast. These fish tend to bend and twist the wire frame on light wire baits, breaking it at the head. A stronger wire also prevents the frame from collapsing during a fast retrieve, which can push the blades against the hook and hamper the action of the bait.

A fast retrieve isn't always necessary, if the smallmouth are in 10 or 15 feet of water, you want a slower retrieve to keep the bait down.
A fast, fairly constant retrieve produces best. Allowing a bait to pause and flutter often triggers largemouth to bite, but it often causes smallmouth to lose interest and turn away. What does work for smallmouth is creating sudden, erratic moves to cause the bait to jump or dart, kind of like you'd do with a jerkbait. But it's important to keep the bait moving constantly and fast."

So what happens if the fish won't chase the blades?

Try a diagonal retrieve, after making a long cast and allow the spinnerbait to sink to the bottom. For some reason, smallies really react to a bait that is moving toward the surface. During the retrieve have the bait make a diagonal path from the bottom toward the surface. This works really well on those neutral fish that won't chase a fast-moving bait.

As with largemouth bass, smallmouth hit spinnerbaits best during the spring and fall months, but not necessarily in the same places.
During the pre-spawn, you're likely to find the largemouth shallow, back in the bays and sloughs. The smallmouth will be on the main body of the lake, in deeper water off the flats.
My best time is when the water is between 55 and 65 degrees. That usually is the time when smallies are in transition and are on those shallow flats, rock points and banks on their way to or from summer areas.

They also are actively feeding at those times. Either they have just recuperated from the spawn and the water is getting warmer each day, so they tend to eat more ... or they're moving shallow in the fall and are feeding up for winter. When fishing a spinnerbait, get that retrieve started as soon as the bait hits the water. Often the most crucial part of your retrieve is the first half-dozen cranks. The initial splash attracts curious smallmouth, and if it's moving immediately, it will keep them interested and make them bite.

11/6/2018 7:54:23 AM
Really good article Rick. I lived in the south for most of my life and realize now, I'm using largemouth presentations more than not. I've had good success with the smallies, but this will up my game. Love those fighting bruts! Appreciate the advice, sir. 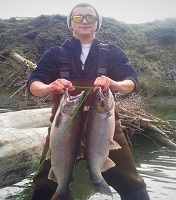