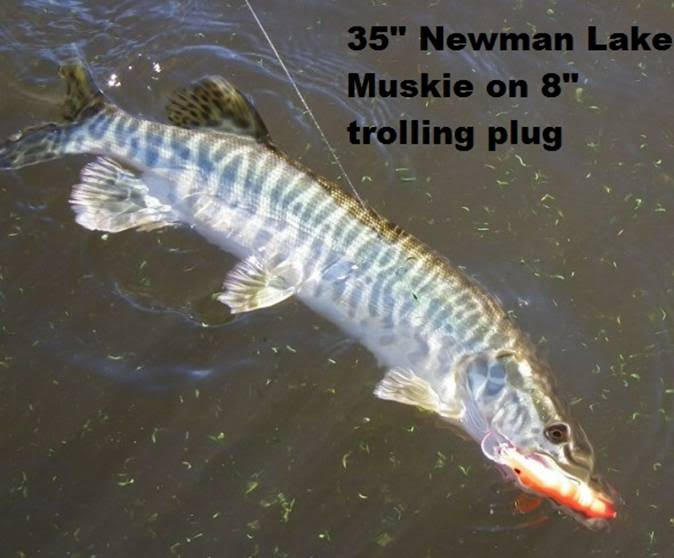 Previous Next
Of all the great fish there are to pursue here in the Pacific N.W. and one of my favorite is the Tiger Muskie. I don’t think there is a prettier fish that swims and they are as mean and furious of a fish as you can find with teeth for days and an attitude to match. Nothing can equal the heart pounding strike of a big Ski hitting a topwater lure. I know it’s not exactly prime Muskie fishing season, but this is an article I have been working on a few months and I have had some requests to do a Muskie article lately so here it is.

Washington has been blessed with a fairly good stocking program for many years, were as Idaho’s idea on how to stock Muskie’s was a joke, but that is beginning to change. Take one of Idaho’s best Muskie Lakes to date, Hauser Lake. All the Idaho record Muskie’s came from this lake until 2013 when a new state record was caught in Little Payette Lake in southern Idaho. It was a monster fish that was 44.26 lbs and 52 ½” long not only setting a new state record but a new World Record as well. In the past Hauser lake was stocked with about 600 fish every 4 to 7 years. So Fishing was spotty there at best. However in the last 5 years it has been stocked with 619 fish in 2014, 602 in 2015, 403 in 2016, 620 in 2017, 609 in 2018, and another 600 this year. Unfortunately none of the other Idaho lakes are getting this treatment. I have complained to IDFG about this for many years and it’s nice to see they finally did something right in at least one lake. I gave up fishing for Muskie’s in Idaho for many years just because Washington had such a better stocking program you had about a 100 times of a better chance at a Muskie at Newman lake then Hauser even though they are only about 5 miles apart. I have still not caught a Muskie in my home waters. They have all come from Washington state, but I hope to change that this year.

So I covered a few of the lakes on where to catch Tigers but here is the complete list of lakes that have Muskie’s in Wash. and the Idaho panhandle. Of the 12 lakes in the Pacific Northwest with Muskies in them I have got to fish 7 of them.

Here is the rundown

Next I will cover the gear you need to start Muskie fishing. I think the most import thing is a good large rubberized landing net that won’t harm the fish. A good set of long needle-nose pliers, a jaw spreader and hook cutters are also tools you need to have on hand to keep both you and the fish safe. A cut proof pair of gloves can come in handy as well. Use your net more like a live well to control the fish, not to lift it out of the water. Try to get the hooks out of the fish while it still in the net. Then if you want a picture grab the fish by its lower jaw from inside the gill plate and lift it with 2 hands, the other supporting its belly. Always hold Muskie’s and Pike horizontally as holding them vertically can tear their internal organs and cause them to die after you release them. If you want to weigh the fish weigh it in the net and subtract the weight of the net after.

Most die hard Muskie fishermen use very long heavy action rods, (Up to 9ft) and reels that can handle lures that range from 1 to 10 oz. These also have long handles to make performing a figure eight at the side of the boat easier. I use my Pike rods (7 ½ to 8 ½ M.H. and H. with Curado 200’s on them) and most of them can handle all but the biggest Muskie lures just fine as long as your reel has a good drag system. You do need a rod you can cast two handed though, for throwing these somewhat larger baits. I like a rod that when I hold it in a normal casting position, the butt end is even with my elbow. That not only makes casting and figure 8-ing easier, but helps once you get a big Ski on in fighting the fish. I mate that up with some good quality braid from 50 to 65 lb. and a 24” 80 to 100 lb. Fluorocarbon leader. I prefer fluorocarbon for its near zero visibility in the water and the fact it doesn’t weigh the front of the lure down like steel leaders do. I use Suffix braids and Yo-Zuri leaders. I tie them together using the FG knot; this is a somewhat hard knot to tie, but is super small and strong. I always tie on a good strong snap with a uni knot to make changing lures easier. You can also buy pre-made fluoro leaders.

One of the more obvious things you will need is a boat as you will need to cover water to catch a Muskie. Learning where to find them at the time of year you are fishing for them is one of the main keys to success. I’d say I’m an expert Pike fisherman, but I’m still learning about Muskie fishing. I have caught enough know the basics on when and where to find them though. You can cast or troll for them and each has its pros and cons about them. As for casting, a long day of chucking heavy lures will flat wear you out, but you keep more active and engaged in the process. Trolling can be a bit boring if the fish aren’t biting and it can be tuff to stay focused. I will switch it up some like I will troll while I eat my lunch or if my arms are getting tired, but I prefer casting. I have got some nice fish using both methods and I can’t really say one is better than the other. One advantage to trolling if you have a 2 pole license is running double the baits in the water. If your boat is set up properly you can troll up to 6 lines if you have 3 people and cover a lot of water in a single pass. The best place to troll is over big weed flats in 8 to 15 ft of water. As for casting weed-lines, logs, stumps, brush piles, rocks, ledges, and docks can all hold fish. Fishing structure that is near deeper water is your best bet

Tigers seem to prefer smaller baits than the pure Muskies of the mid-west and Lower Canada with lures in the 4-8” size range in more natural color patterns like Perch getting the most bites. Some of my favorite Muskie baits are the 168mm and the 200mm S-waver by River-2-Sea. This is a great lure to use on fish that fallow, but won’t hit. I use the spin stop technique on them with great success. This is just a short hard pull of the rod, then giving back slack in the line and the bait will move quickly away from the fish a few feet then do a 180 deg turn and look right back at the Muskie fallowing. This has produced a strike for me 99% of the time on fallowing fish. They can’t resist this spin stop technique, and it works on pike as well. Some of my other favorite lures for tigers are large 5” to 7” Whopper Ploppers and Double Cowgirls which is large inline spinner. The one thing I can say is if you get a fish to fallow try speeding up your lure rather than slowing it down, as most novice anglers will do. If it keeps fallowing the bait reel it until it is about a foot and a half away from your rod tip. Then make a sharp L turn at the side of the boat and keep the bait in the water moving in a figure 8 or circle pattern. Go as deep as your rod is next to the boat and out to near the surface at the farthest from the boat until the fish either hits or looses interest and swims off. Don’t be afraid to make a lot of noise and commotion with your rod if you have a fallow as trust me, you are more scared of them then they are of you!

1/8/2020 10:48:03 PM
Right on good article, Rick. I only take exception concerning fluorocarbon leaders. I started using them until a friend using them got snipped off like it was a spiderweb. And remember, you got snipped off by a pike this last November; favorite lure and all! I saw it. I've had about 50 tigers into my boat since 2001 on nearly all steel leaders. Steel may have turned off some fish but I've never left a lure in a tiger's mouth either. Fluoro works fine when the lure is outside the fish's mouth. Takes too long to hook up a nice tiger just to chance loosing it. I've even had the side plates of a sturgeon snip off a fluorocarbon 80LB. leader also.