“And now for something completely different”. That’s what came to my mind when Adrian O’Connor, owner of Reel Obsession Sportfishing, informed us that for today he was going to take us to some locations to troll for ling cod and bottomfish. “This should be interesting” I thought.

I was fishing with Aaron Borg and Rob Holman of NWFR. We were on Day Two of our three day NWFR adventure fishing the waters of Zeballos, B.C. Joining us at the lodge were seven other lucky anglers that took advantage of a special discount rate Adrian gave to our NWFR members.

The weather had deteriorated from yesterday’s partly sunny. We now had low hanging clouds and on and off drizzles. The broken clouds hung low over the forested shoreline. In its own way, I find this type of broken clouds to be as beautiful as sunny clear skies. Winds were calm making for an easy run to the fishing grounds.

Adrian has, as would be expected, several underwater reefs and locations that he has developed over the years. His “go-to” spots get his guests on the fish consistently, year after year. Today, he explained “we’ll be fishing a large underwater reef that has a rocky bottom surrounding a sandy bottom. This rocky bottom is habit to smaller fish and octopus, and it draws in the larger fish. It can produce well for ling cod”.

Before we went trolling for bottomfish, we trolled some near-shore, shallow water locations for chinook salmon. What spectacular scenery! The waves crashing into the rocky shoreline and reefs made for some amazing pictures. Not to mention, a huge sea lion standing watch over his domain and eagles were flying overhead.

Our port rod exploded in short order and I grabbed the rod. This was a nice king! Multiple strong runs gave me a great challenge on the knuckle buster reel and 10 foot rod - I love this set up! The fish eventually weakened and I was able to slide him into the awaiting net. Wow, what a beautiful fish to start the day!

The salmon bite was slow so it was time to head to our next spot and troll up some lings.

We used flashers and bait, using downriggers to get the gear down to the bottom , a few feet off the deck in 120 feet of water. Trolling speed was fairly slow, we were going fast enough to keep the flashers wobbling back and forth, but not rotating.

As alluded to at the start of this report, I’d never trolled for ling cod, nor had Aaron or Rob. It didn’t take too long before we were able to recognize the sometimes subtle tap tap of a bottomfish. Of course, the lings had a more forceful tap tap. And on release from the downrigger it was pretty obvious when we had a ling. We worked this productive location for a couple hours, and caught a lot of fish. A limit for each of us, in fact. But it wasn’t ling cods we were mainly catching. Nope, instead time after time huge, brightly colored yellow eyes and vermillion came to Adrian’s sharp gaff. As we hit our limit for vermillion, we could have kept fishing this area for lings, however, rather than stress and kill bottomfish that likely would not recover being caught from 120 feet deep, he decided to move us to another, smaller reef location.

It was a good location change! Within seconds of lowering our first rig the rod doubled over. Aaron grabbed the rod and battled in a beautiful 20 pound ling in to the boat. Shortly after, Rob and I got nice lings. Another pass yielded some smaller lings and with that we were done for the day.

Back at the lodge, Chef Jason had prepared another five star meal. We visited with the other NWFR guests who reported good fishing and bountiful catches. Just another day in paradise! 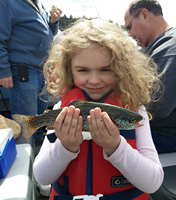 6/25/2016 8:51:00 AM
We had such a positive response to the Reel Obsession promotion it may well happen again next year. Between the NWFR discount and the strength of the dollar the trip was very inexpensive for this type of fishing experience.