I’m not even sure where to start with this one. For work, the last couple of weeks I’ve been out on the water almost every day. I have Sundays off and we considered doing a land-based adventure today but NAAAAH… In the end we decided to fish Lake Whatcom so in preparation I took the online AIS exam. With AIS certificate in hand we headed for the Bloedel Donovan Park launch in Bellingham. Wanting to get my AIS stickers I had heard that the inspection station opened at 6:00 so with boat in tow we headed north around 5:20 or so (a late start for a kokanee trip). We passed the inspection and were all stickered up so we splash the boat and were heading out of the ramp basin by 6:30.

There were a gazillion kokanee jumping all over the lower lake but we bypassed those with a plan. My plan had been to start at the top of the lake and explore our way back towards the launch. As we ran up the lake there were kokanee everywhere and to be honest it was hard to stick with the plan. Even at 30 mph and in 200’ plus of water I could see massive schools of kokanee on the meter. With visions of sugar-plums, I mean kokanee dancing in my head we pushed on. On arrival at the far end of the lake it was nuts, multiple kokanee were jumping everywhere you looked.

First line deployed was a lead-line rig and even before I got a downrigger ball out the lead-line rod was dancing. I couldn’t get a rigger line down because we were messing with multiple hookups on the lead-line rig. Finally, the sun peeks out over the top of the mountain and our surface bite slows enough to let me switch to two downrigger rods. In short order the surface bite completely dies and we start to hunt kokanee with both downriggers. The 2-pole endorsement is not allowed on Lake Whatcom but even at that it was hammer time and we were hopping. With multiple doubles, a few lost fish, playtime with a huge cutthroat (released) and general on deck pandemonium we were done in no time. In short, the fishing was spectacular!

We were running Arrow Flash dodgers in gold/UV and silver/UV. I think that anything with hooks on it would have worked but we were running one of my kokanee flies on one side and a custom two-bladed spinner on the other side of the boat. Both the kokanee fly and the spinner were tied 8” behind the dodger on 15# fluorocarbon. I was baiting the hooks with a combination of dyed playdough maggots and tuna corn. Initially our trolling speed was 1.0 but the wind picked up and I had to kick it up to 1.4-1.6 mph to maintain control. There were fish throughout the water column and in most water depths but we keyed in on the old creek bed and ran the riggers at 50-60’. Again, there were fish everywhere so I don’t think the water depth or downrigger depth would have made much difference.

In the end we had a spectacular morning on the lake. An hour of red hot fishing and a few hours of just motoring around exploring. I wasn’t completely sure if the 10 kokanee limit applied to Lake Whatcom so we kept 10 kokanee. After we got home a good friend texted me with the WDFW info and we could have kept 20 fish. We also caught a huge cutthroat, but Lake Whatcom is off limits for cutthroat so we safely released it. The 4-lane ramp at Bloedel Donovan Park is very nice with 2 long floats. I was told that the ramp is open 24/7. There is also a WDFW launch up at the far end of the lake but If your launching a larger boat you may want to think twice about it. Also, there is a nasty looking string of rocks right alongside the WDFW ramp that you would have to watch out for. 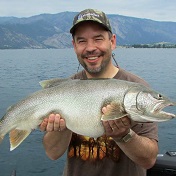 5/6/2019 9:32:47 AM
I almost went to Whatcom Sunday, but stopped at Samish instead. Crazy action on Samish too. Yea statewide limit for kokanee is 10 now, unless posted otherwise for a specific body of water.

I keep hearing of lots of cutts being caught in Whatcom, curious if they will ever consider a slot limit like on Samish. Sounds like the cutts rebounded there fairly quickly. With all the kokanee fry, should be a shortage of food :)

5/6/2019 11:27:37 AM
Great report. Thanks!
I want to fish Whatcom but am leery of this AID deal. I have an old aluminum with drain channels under the seats. All sorts of crap gets under there. I’ve had baby crab crawl out days after a trip.
How could I ever pass their inspections? Or do they just want the money for the sticker? No live wells and I could disconnect my sump pump...

A couple questions about using leaded line. How long is the mono between the leaded line and the dodger?how many colors were you letting out?